What is an IR Radiator? 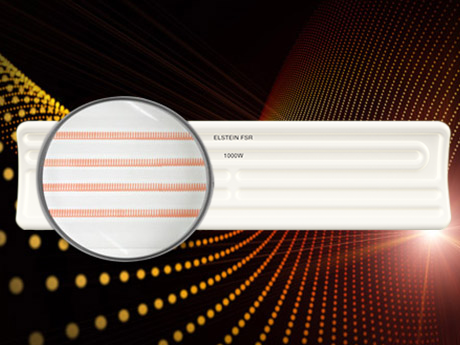 The following explanations explicitly do not include IR products which are used for purposes other than for warming such as IR transmitters or astronomical and military detection systems.

The IR radiators discussed here are technically constructed units designed for the purpose of transferring as much of the input energy (electricity, natural gas) as possible into warmth which is delivered by a radiating surface.

Independent of the design of the IR radiator the target always is that a maximum amount of emitted radiation will be transported, independent of any other transport medium, in a range of wavelengths which heat up the material with a minimum loss of energy.

It is to be noted that it is the technical design of these infrared radiators which causes them to emit in a certain range of wavelengths. For example the range of 3 to 10 µm. This is the radiation maximum whereby the IR radiators also emit outside of this radiating power maximum.

The differing atomic structures of materials to be warmed means that each has its own spectral range at which it best absorbs the emitted radiation. Each material has its own rate of absorption. Radiation which meets material which cannot absorb it will either let it pass through or reflect it.

The absorption process at the warmed up material is therefore always proportionate between reflected and transmitted radiation. A 100% absorption rate is technically not possible. Complete absorption exists only theoretically in the model of a “black emitter” or “black body”.