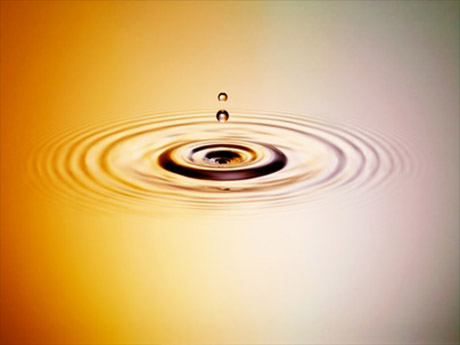 When exposed to IR radiation, objects absorb some of it. The absorption of this radiation is an influx of energy and increases the temperature of the object.

There are different causes for IR radiation only being partially absorbed by the objects it is in contact with. One physical fact which is crucial to the absorption process is that thermal energy can only be transferred from an object of higher temperature to an object of lower temperature. This also applies to the transfer of radiated energy (e.g. contact heating). Another point for consideration is that radiation between the emitter and the absorber is interactive. In other words, the absorber emits IR radiation during the absorption process.

One reason why an object is only able to absorb some of the total IR radiation that it is exposed to is in the nature of its molecular structure. The nature of an object's molecular structure simultaneously defines its ability to absorb IR radiation in a definite wavelength range. This wavelength range is its absorption spectrum. There are bodies and materials with multiple maximum absorption values, within which ranges they absorb IR radiation parts equally well. Just as emitters can emanate IR radiation with different wavelengths, objects or material hit by the IR radiation can absorb it in the same way. Because materials have different molecular compositions, they can be shown to have an individual absorption spectrum at a certain temperature (e.g. room temperature). Radiation not corresponding to this absorption spectrum is able to pass through (transmission) or is reflected. This radiation does not contribute to the heating of the material.

The general basic rule that a good absorber must also simultaneously be a good emitter is thus derived from the physical principles above. There are, however, considerable differences at times with regard to the wavelength range in which a certain material absorbs or emits more at a given temperature. The following list of materials compares the total absorptivity a for solar radiation and the total emissivity e at T = 300 K:

The example of snow shows that it can only absorb solar radiation at a 0.30. The reason for this is its reflective white surface for the given spectral range of solar radiation. Snow melts slowly in spite of solar radiation. If snow were to be exposed to long-wave IR radiation, for example, radiation from the warm wall of a house, its absorptivity would increase. In the process it could achieve a value of up to e 0.91, which is also its emission maximum. The convection effect is disregarded in this example. Another example of material-specific differences with regard to emission and absorption is specially layered metal foils used in the manufacture of solar collectors. Their absorptivity and emissivity are a 0.95 and approximately e 0.05 respectively.

A few laws of radiation that make the physical principles of IR radiation theoretically and experimentally comprehensible will now be mentioned.